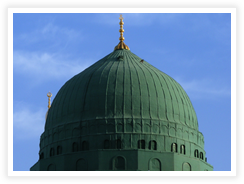 Back to Article Listing

A poor man complained to Hazrat Shahabuddin Ibn Arslan (radi Allahu anhu) about his illness. The disease was incurable. No doctor or physician could even suggest any medicine for his disease. Hazrat Shahabuddin (radi Allahu anhu), who was a very great Saint, listened patiently to this poor man and then told him to recite the above Durood Shareef. The poor man immediately did so and his illness disappeared so quickly as if it was never present. The poor man gladly returned to his house.